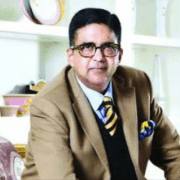 While Luxury Connect is a boutique consulting organization with a clear focus with a 360-degree approach towards luxury in India, LCBS is India's first and only Luxury B-School. He is also a Marshal Goldsmith Stakeholder Centered Certified coach. In addition he is also the president of Center for Education Growth and Research (CEGR), Delhi NCR Chapter and an advisor to - 'Promising Indian's, Behind The Ramp & Modestreet Fashion.

Mr. Gupta has been involved in the evolution of the fashion and luxury segment in India right from manufacturing, joint venture factory set-up and franchising in the county. He has also been involved in being a guide to NIFT and Pearl Academy from their grass root stages of inception and evolution as an academic board member.

Awarded as the 'Luxury Retail Icon of the year 2012' by Asia retail congress, Gupta has won several recognition across India, SEA and GCC regions. Featured in 'India's top 100 most influential men of luxury 2013, 2014, 2015, 2016, 2017 & 2018 for 6 years in a row, he has also been on the panel of jury members for' Luxury Lifestyle Awards for Asia and GCC'. Mr. Gupta has been, recently acknowledged as 'Most Influential Retail Professional for Asia - GCC and Africa: 2016' by Asia Retail Congress. "Rashtriya Shiksha Gaurav Puruskar 2016" by Center For Education Growth and Research, India.

He helped not only bring but establish luxury brands like Versace, Versace Home, Versace Collection, Corneliani, John Smedley, Tween Damat ADV, Arredo Classic etc in India. He has now been mandated by a plethora of Luxury brands across fashion, lifestyle, home, interior & residences etc for their India entry strategy. A regular speaker at most Luxury Forums, Fondazione Altagama has also recognized his contribution to the growth of Italian luxury industry by his pioneering efforts in India.