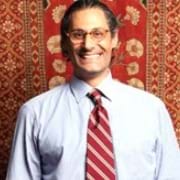 From a childhood filled with drawing and painting to his studies in Textile & Product Design at the Fashion Institute Of Technology in his home town of New York City, the primary motivation of Peter D’Ascoli’s work as a designer has always been a desire to create value through beauty. Driven by curiosity and inspired by a passion for historic decoration and exotic cultures, Peter D’Ascoli’s career has led him around the world studying arts and crafts and working with artisans and production managers to create products for interiors & fashion.

He has held several high profile positions over the course of his three decades in the fashion industry, including Studio Director for Diane von Furstenberg, Creative Director at Covington Industries, and as Designer of the best-selling Waverly vintage fabric collections. However, the job that most profoundly influenced his work was his first, right out of school, when he spent two years working for the Indian Government’s Handicrafts & Handloom Export Corporation traveling across India developing traditional crafts for contemporary markets.

In March of 2006, after Globalization swept most product development to Asia, and after more than twenty years of designing and directing studios in New York City, Peter established the Talianna Studio in India to tap that country’s vast creative resources and to be closer to the factories producing his designs.