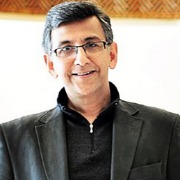 Chairman of the Board - Ethos Watch Studios

Mr. Yashovardhan Saboo, B.A (Hons.), MBA (IIM, Ahmedabad), has been the Chief Executive Officer of KDDL Limited., since March 25, 1981 and also serves as its Managing Director. Mr. Saboo serves as Managing Director of Kamla Retail Limited. He has over 28 years experience. He serves as Co-Chairperson of Punjab, Haryana, Himachal Pradesh & Chandigarh Advisory Council at Federation of Indian Chambers of Commerce and Industry. He serves as the Vice Chairman of KDDL Limited.

He has been conferred with “Udyog Ratna” Award from PHDCCI in 2005, has been the Chairman of CM, Northern Region, Chandigarh in 2002- 2003 and is also founder member of Youth Technical Training Society, Chandigarh. He studied PGDBM from IIM A and has BA (Hons.), MBA (MM).