Despite economic slowdowns across the world, size of the global luxury market is estimated to be around 2 trillion USD. The BRICS region, more specifically China and India have been in the spot light for the past few years. In the more recent past of 201 5, the luxury industry in China faced many challenges related to luxury consumption, regulatory issues, tariff structures, currency reasons and a severe clamp down on the 'gifting culture'. Stores opened in a hurry by brands across categories began to shut shop. The entire global luxury industry was severely affected. All brands are once again back to recreating a fresh strategy canvass for future growth.

If one does a quick analysis across the 3RlCS nations, one finds that :

So is there a India opportunity for Luxury Brand?

India's economy is much stronger now. The indicators are all favourable. The fiscal deficit, the inflation index, the current account deficit and the forex reserves are all healthier & growth driven. 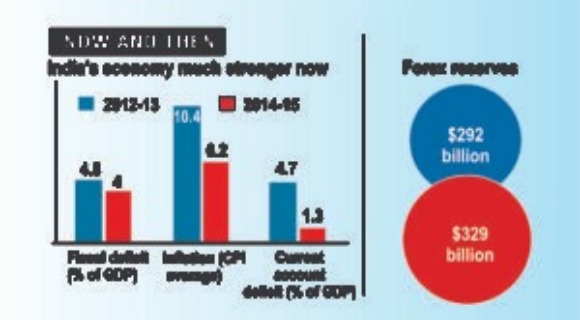 The percentage annual growth rates projections stand best in the 3RlCS region at 7.5% in India as against 6.3% in China; 2.1% in South Africa & almost negligible in Brazil and Russia. 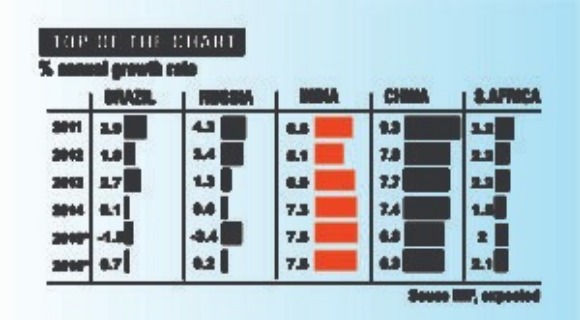 Besides, India has been voted as the 7th most valued 'nation brand'. With an increase in 32% in its brand value to $2.1bn, India has moved up one position in the most valued nation brands list. Not only that, this surge of 32% is the highest among al/ the top-20 countries on the list.

The nation brand valuation is based on five year forecasts of sales of all brands in each nation and follows a complex process. The Gross domestic product (GDP) is used as a proxy for total revenues. Among 3RlCS nations, India is the only country to have witnessed an increase in its brand value with all others — 3razil, Russia, China and South Africa — seeing a dip in their respective brand valuations.

In addition, India is the second most valued among these emerging economies after China, followed by Brazil, Russia and South Africa. 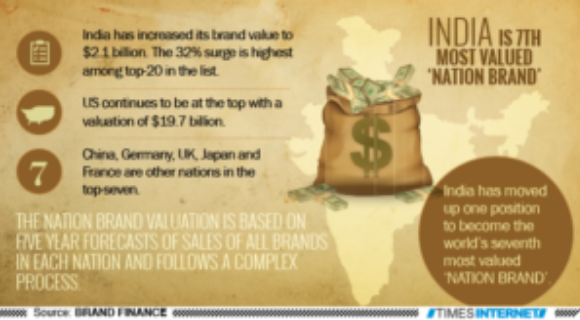 The Indian consumer has been divided into five different classifications. While the top most of the pyramid or the Elite Class is just 4% of the overall population, the absolute numbers are far too attractive for any luxury brand to ignore. These numbers are expected to grow from current 10 m to 26m households by 2025.

In addition, by 2025, the overall average house hold income is expected to multiply by 1.7 times. This in itself is an attractive proposition for any global retail brand. 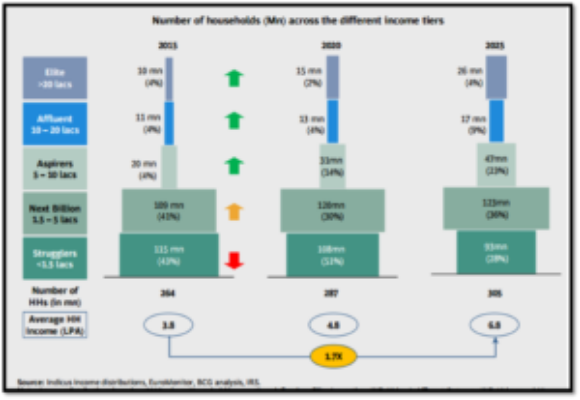 According to Credit Suisse's 2015 Global Wealth Report, India has ranked up in the list of Top 20 countries as the number of ultra-high net-worth (LIHNW) individuals rose by 100 since mid 2014 to now stand at2100. In addition, India is home to the fourth largest population of millionaires in the Asia Pacific region 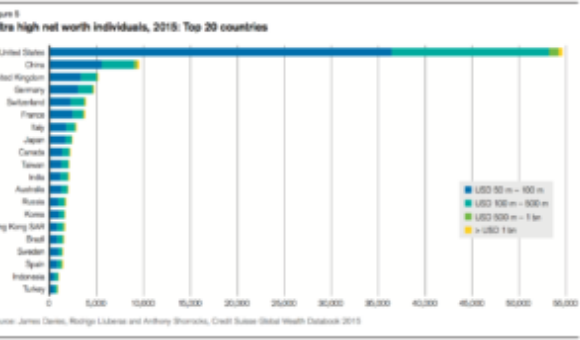 Besides, it is estimated that India will witness a three-fold increase in HNI wealth over the decade — it is expected to touch $2.3 trillion in 2020 from 5949 billion in 2010. by 2020 the wealth of high net worth individuals (HNls) in India will rise by 94% as opposed to China's, which will grow at 74%, providing attractive opportunities to luxury retailers

Delhi and Mumbai will remain as India's richest cities in terms of millionaires' wealth concentration. 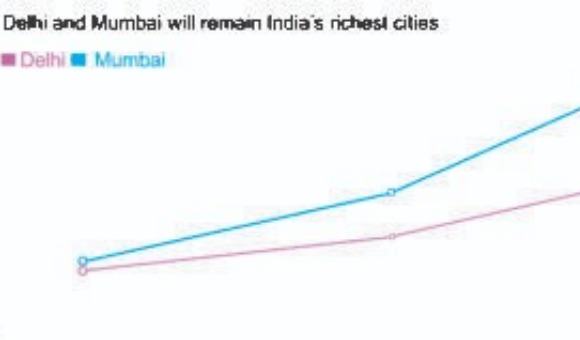 Significance of the Indian Retail Sector

The contribution to GDP by retail sector's revenues in India is amongst the highest in the world. For most developed markets retail sector revenues are 15-20% of the GDP, while for India is around 25%. It is estimated that by 2022, the size of the retail market will exceed S 1.2 trillion. region 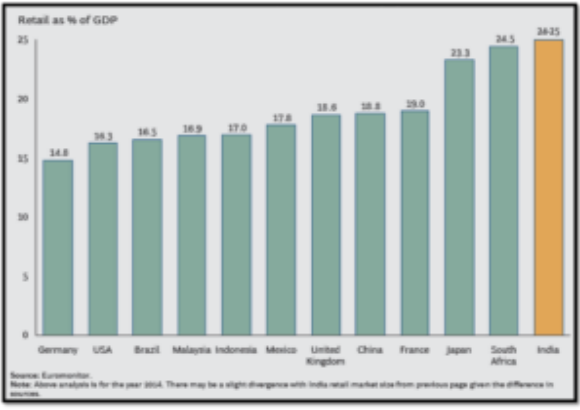 India is a highly digitally inclined nation. Digital influence and online purchase is projected to rise exponentially. It is estimated that by 2020, approx 350Mn people are likely to digitally influence as compared to 150Mn now. This will account for 5240-250 *an i.e. 20-25% of the total retail spending. It is also estimated that by 2020, 200-250 Mn Indians will shop online, as compared just go Mn currently. S=651NR) 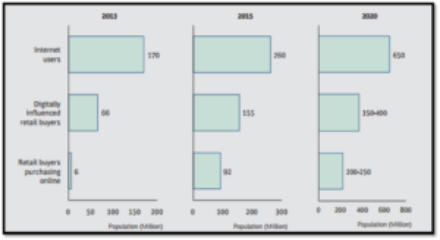 According to a research report by Euromonitor, India merely contributes 1-2% to the Global Luxury trade. However, despite this insignificant percentage, the market is growing at a compounded annual growth rate (CAGR) of about 25%. Indian luxury market is expected to cross S IS. 3 billion by 2016 from the current S 14.7 billion.

As per a study by Assocham , in 2015, Luxury Jewellery, electronics, SUV cars and fine dining have grown immensely. Apparel, accessories, wines and spirits are growing as strongly as in the past. Consumption of branded wine is also likely to register a over 30% increase in the metro cities.

There is a growing need for individuality and exclusivity as people get richer. The size of the HNl's continue to get bigger and they spend over 40% of their monthly income on some of the world's largest luxury brands whereas the middle income group (MIG) consumers spend 8-10 per cent of income on luxury products

According to Cushman & Wakefield report, in 201 5, the luxury retail space in India has increased to 1.44 per cent of the overall retail space as compared to 1 per cent in the past,

Given the wide reach of the digital medium and the very low entry barriers, luxury brands are beginning to expand their presence through the online space.

There is money in the smaller towns & markets, but there is no access to luxury brands. As Indians acquire global tastes thanks to affordable foreign vacations, influence of Hollywood and Bollywood, and the Indian diaspora, they are looking to own foreign luxury brands.

En-cashing on this sentiment, online fashion retailer Myntra sells premium brands such as Desigual, New Look, Furla, Superdry, Emporio Armani, L'occitane etc in ts portfolio. Most recent addition is fashion house DKNY and The North Face. Owing to the response of premium international brands, Myntra has revised its revenue target fro international brands to 1 5 per cent of its revenues in the next 12-18 months, from current 5 per cent.

The key spending on luxury products is pre-dominant in the metro cities. In 2015, Delhi ranked first in spending most on luxury brands followed by Mumbai (2nd), Ahemadabad (3rd) Pune (4th) and Bangalore (5th). However, spending on luxury goods has spread much beyond and across tier l, Il and Ill cities.

Delhi NCR - Has the most enriching retail legacy among the Indian cities, therefore the city tops all real estate drivers. Delhi, especially the National Capital Region, remain one of the strongest markets in terms of sale volumes for the manufacturers

Mumbai - Mumbai has the highest retail demand potential. However, a lack of availability of land parcels leading to high rents in prime areas act as a dampener that causes Mumbai to lag behind Delhi

Bangalore - Affordable rents in the city—compared to other Tier I & some Tier Il cities, have helped the retail to flourish here. However, the city has lesser household expenditure even when compared to Kolkata and Chennai

Ahmedabad - A cash rich city, increased spending on premium high-end offerings from global auto makers. For Italian super-luxury sports car maker Lamborghini, cities like Ahmedabad have put up sales figures of six units in the last six months. These figures are significant because the Volkswagen-owned brand sold 1 6 units in 2014 as against 22 in 2013

Chennai - "Chennai-ites are mature shoppers. They are well-travelled and not afraid to pay for quality," says Ajay Agarwal, Managing Director, aergamo. Chennai embraced the concept of department stores much before the other metros did. Demand for office space continues to grow for the third straight year

Hyderabad - Hyderabad offers attractiveness in terms of affordable rents, which is higher only to Pune among the Tier Il cities. However, lesser household income and household expenditure has ranked lower.

44 per cent of these wealthy Indians reside in tier-two and tier-three cities. In the tier 2 and 3 cities, the highest demand is for luxury automobiles, followed by apparel for women and accessories for both sexes. 600 cities from Tier 2, 3 and 4 categories would be 4.5X times the current size (Source: BCG)